IMPORTANT UPDATE: As of earlier this year, CDBABY has closed their retail store. We were disappointed to hear this as it was one of the main ways that people were purchasing our music. We will soon be updating all the links on this site to direct folks to other avenues to get our music, but in the meantime, most of our releases are available via Amazon, Bandcamp, and Spotify. We apologize for the inconvenience.

We are excited to announce that Farpoint has contributed a track to the Starcross Music John Denver tribute album, I SHOULD HAVE BEEN HOME YESTERDAY. Farpoint's contribution is a cover of "The Foxfire Suite," from the 1991 album DIFFERENT DIRECTIONS. We were honored to be a part of this wonderful tribute to one of America's greatest songwriters! Additionally, several Farpoint members appear on many of the other songs. The album is available through Amazon, iTunes, Spotify, Youtube, and more! 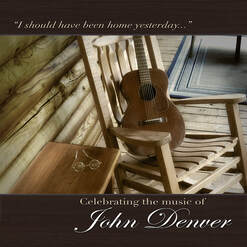 Another semi-archival single release!
We are happy to announce a new single release: our cover of the Tears for Fears song, "Mad World."
Several years ago we were asked by artist Randy Bishop to cover this song as a part of the soundtrack accompanying his comic book, THE HAWK OF NEW YORK. At the time Farpoint was a 4 piece band comprising Kevin Jarvis, Rick Walker, Dean Hallal and Frank Tyson. In 2016, Jennifer Weich returned to the band, and her vocals were added to the song, and now we are making it available digitally worldwide to download or stream from your favorite source. We hope you enjoy it!
​​ 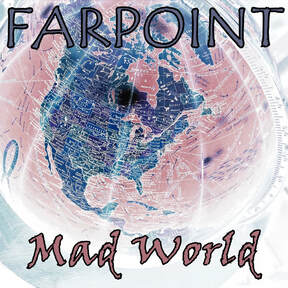 A new release from the archives! Starcross music has released a previously unreleased Farpoint song from 2005! Written by Clark Boone, "Loved" represents the sound of the FROM DREAMING TO DREAMING era of the band. Featuring Dana Oxendine Edmunds on lead vocals, Clark Boone on backing vocals, Kevin Jarvis on keyboards and bass, Frank Tyson on electric guitar, and Rick Walker on drums, the song's bright, upbeat sound and positive message are reminiscent of Farpoint's songs of the time period. We are thrilled to finally see "Loved" getting a worldwide digital release. Download from the link below, or stream via YouTube, Spotify, or your favorite streaming service.
​​ In addition to "Loved," there are several brand new songs in the works from Farpoint scheduled to be released later this year and into 2020. Please stay tuned for more information!
​
​July 7, 2017

​Major announcement: Farpoint is pleased to announce the release of STARCROSSED, a 6 song digital compilation album featuring one song from each of our studio albums. STARCROSSED is now available as a FREE download from Bandcamp at the link below. The tracklisting is:

We hope you enjoy this new compilation album, and please feel free to spread the word! 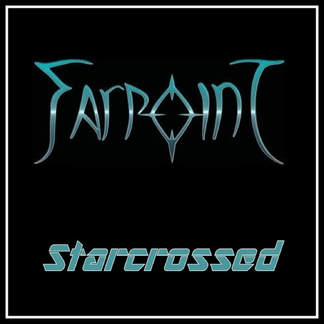 In celebration of 20 years of Farpoint, we have made available 3 previously unreleased live versions of Farpoint songs. Recorded live in June, 2011 at the Sumter Opera House, these songs were cut from the WATER OF LIFE live release due to time constraints, but are now available via Bandcamp. Please check them out and help us spread the word!

Announcing a Farpoint-related release...GREYFEATHER, featuring Farpoint's Kevin Jarvis along with Brian Coralian of IZZ, Wade Summerlin of Cobweb Strange, Steve Katsikas of Little Atlas, and Dennis Mullin of Iluvatar, have released their debut album. Sample and purchase at the link below:

We were very saddened today to find out that Farpoint's first bass player, Don Fink, has passed away. Don was a talented musician and a very nice guy. He also kept us laughing! Although Don wasn't a member of Farpoint for long enough to appear on any of our recordings, he did play the first few shows, including the infamous "Yescamp" show in November '98. Farewell Don. You will be missed.


Lots of Farpoint-related, Christmas themed music to check out this year! 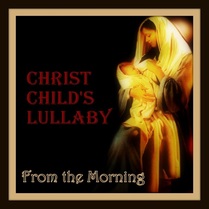 ​ A new arrangement of this old Christmas folk song performed by From      the morning, featuring Kevin Jarvis on guitar, bass, keys, and background  vocals.

​A traditional acoustic arrangement of the beloved Christmas carol performed by From the Morning, featuring Kevin Jarvis on guitar. 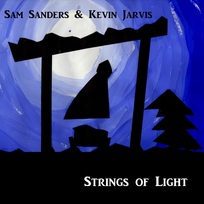 ​An album of acoustic guitar Christmas carols arranged and performed by Kevin Jarvis and Sam Sanders. 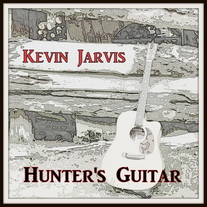 More new music! Today we release our cover of the Moody Blues classic, "The Story in Your Eyes." The Moodies were a big influence on Farpoint's music from the very beginning, so it's fitting that we would cover this song. This is actually our second Moody Blues cover, as we also recorded a version of "New Horizons" for the 2006 Mellow Records Moody Blues Tribute, HIGHER AND HIGHER.
​Please check it out and, if so inclined, purchase a download of the song at the link below! 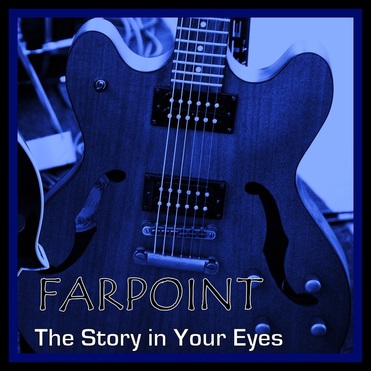 We are happy to announce the release of our brand new recording of "To the River," a song that was originally released on our 2002 debut album, FIRST LIGHT. The song was written by Clark Boone, Kevin Jarvis, and Kim Saul, and is performed by: Exciting news! Since reconvening in the winter for our live internet broadcast, the KINDRED era lineup of Farpoint has returned to the studio to finish up a couple of old songs that we had been previously working on...One is a rerecording of a very old Farpoint favorite, and the other is a cover by one of the early art rock bands that was a huge influence on us. Both of these songs should see release by the end of the year. Stay tuned for more details!

Farpoint-related release: Kevin's acoustic art-folk duo, From the Morning, has released their debut full length album, PROMISED LAND. Farpoint's Rick Walker and Jennifer Weich make guest appearances on a few songs. The album even includes covers of two Farpoint songs, "Another Day" and "Water of Life," amongst a mix of new originals, covers, and traditional folk songs. Please check it out! 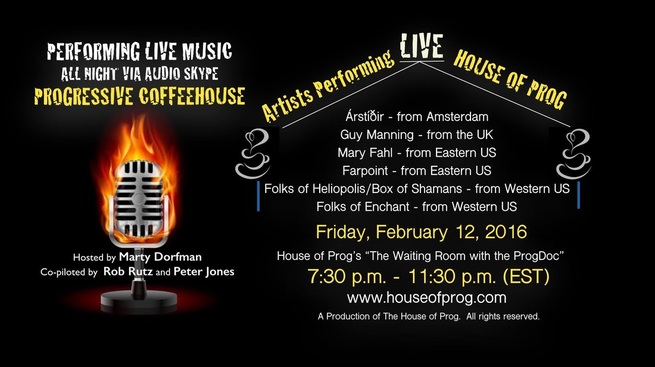 
We are happy to announce that we will be making a special live acoustic appearance on the House of Prog internet radio show The Prog Coffeehouse on the evening of Friday, February 12, 2016. We are honored to be joining some truly amazing artists for this evening of acoustic prog. This will be the KINDRED era lineup of Farpoint, comprising Dean Hallal (vocals), Kevin Jarvis (vocals, guitar, mandolin), Jennifer Meeks Weich (vocals, flute), Dave Auerbach (guitar), Frank Tyson (bass, vocals) and Rick Walker (percussion), performing live together for the first time since 2009! Please come join us!
​January 1, 2016


Happy New Years to all our Farpoint friends and fans out there. We hope 2016 is a wonderful year for you all!

As mentioned previously, December saw the reunion of the KINDRED era lineup of Farpoint, together for the first time in over 5 years. We are putting together the foundations for a special, one-off acoustic event, to take place very soon. It was great singing, playing, and just hanging around together again! 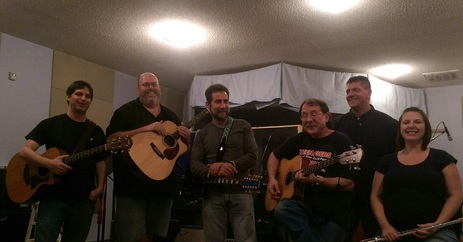 Also, we have just updated our ABOUT FARPOINT page to bring it up to date, the DISCOGRAPHY page to include singles and compilation appearances, and the BAND MEMBERS page, to include previous members of the band! Please check them out when you get a chance!

First, we'd like to go ahead and wish all our friends and fans a Happy Thanksgiving, Merry Christmas, and Happy Holidays!

Next, we are happy to report that an unexpected opportunity has arisen that will likely result in the reunion of the KINDRED era lineup of Farpoint, for a special one-off acoustic event. We will be convening in early December to discuss the details! 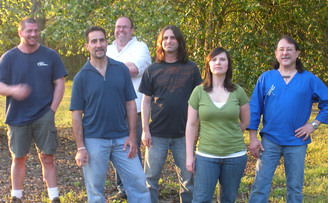 Farpoint related release...From the Morning, featuring Farpoint founder and guitarist Kevin Jarvis, has released their first digital single, "The Bridge." The song was written in the aftermath of the tragedy at Mother Emanuel church in Charleston, SC, and is meant to be a reminder of how so many people came together in love and unity afterwards. "Out of hate came love." Check it out by clicking on the picture below: 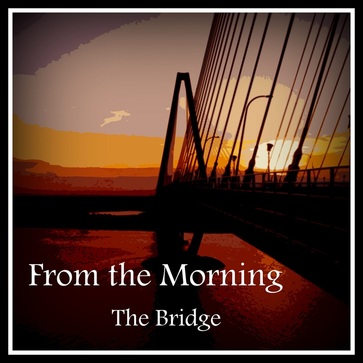 
Check out some videos for songs from PAINT THE DARK:

JANUARY 30, 2015
Just a reminder about several Farpoint-related releases from the past few months, all available as linked below:

THE HAWK OF NEW YORK, a sountrack to accompany the comic book by Randy Bishop, featuring a cover of the Tears for Fears song "Mad World" performed by Farpoint, as well as a cover of A-Ha's "Take on Me" performed by Kevin's acoustic duo, October Layne.

And last but not least, Farpoint's 6th studio album, PAINT THE DARK, which many critics are calling Farpoint's best effort to date.

Farpoint-related news! Farpoint founding member and multi-instrumentalist Kevin Jarvis, along with former Farpoint guitarist Sam Sanders, has released STRINGS OF LIGHT, an album of acoustic guitar based Christmas carols. You can check it out by clicking on the cover art below! 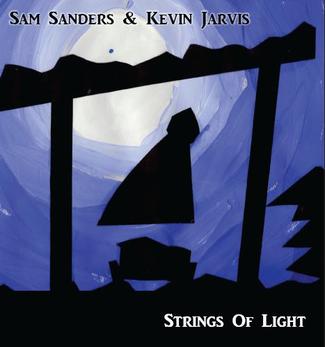 Farpoint's 6th studio album, PAINT THE DARK, is officially available via 10T Records! The album can be purchased or downloaded directly from CDBaby, Amazon, iTunes, and many others. Please check it out, and help us spread the word! 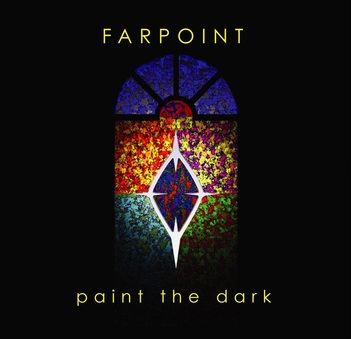 10T Records will release the brand new full-length CD release from South Carolina’s
FARPOINT, entitled “Paint the Dark,” on May 6, 2014, with a retail street date
of June 17, 2014.

“Paint the Dark” features Dean Hallal on vocals, Kevin Jarvis on guitars, keyboards,
mandolin, and vocals, Abby Thompson on vocals and piano, Frank Tyson on basses,
guitars, and vocals, and Rick Walker on drums and percussion.  Special
guests include Christi Hunter Brownlow on violin and Jennifer Meeks Weich on
flute.

With “Paint the Dark,” Farpoint has taken everything that makes their unique blend of
uplifting and positive symphonic flavored prog, folk, and hard rock, and applied
it on a more expansive canvas, creating the most layered and compositionally
mature record of their career.  Long-time fans will instantly recognize the
band’s signature style, while appreciating the more adventurous and atmospheric
territories that the band explores on this release. “Paint the Dark” was
produced by Kevin Jarvis and Farpoint and mixed and mastered by Jeff Hodges
(Fromuz, Man On Fire, Band Of Horses).

“Farpoint is once again thrilled to be releasing our new album on 10T Records,” says Kevin
Jarvis.  “It’s an honor and a privilege to be a part of this amazing team,
from the incredible staff to the amazing roster of artists. It’s a wonderful
feeling to not only be a label mate but also a fan of nearly every band on the
label. Special thanks to Steve Carroll and Jeff Hodges for going above and
beyond in so many ways to make this the best Farpoint release yet!”

“We love the fact that we aren’t just partners with the artists on our roster, but
we are genuinely friends with most of them,” says 10T Records president, Steve
Carroll.  “That relationship makes bringing new music to the marketplace so
much more rewarding.  We’re very happy to be once again working to bring
new Farpoint music to their fans, and to the new fans I believe this release
will generate for them.” 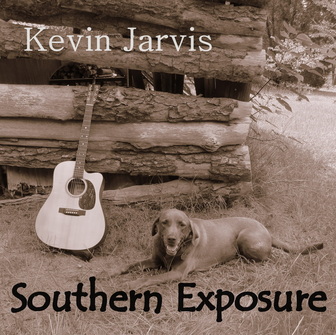